We’ve got a lot of news in The World of Amazon this issue, so we’ll keep our opening here brief. In Seller Insight find 10 helpful tips on Instagram Marketing, and in Tips & New Stuff we show you updates to the report generator, as well as tease a bit of some great new tools that are coming.Here’s to new horizons!

A few great new tools that have been in development and are slated for release in the next few weeks. Interested in listing optimization? Competition research? Keyword sorcery?Stay tuned here, to ManageByStats This Week, for launch information as it becomes available.In the meantime we continue with other feature enhancements. This week we’ve made improvements to the Generate Report function in Customers. You’ll see the layout has been arranged to more naturally flow through the criteria-selection process, leading to your output report. 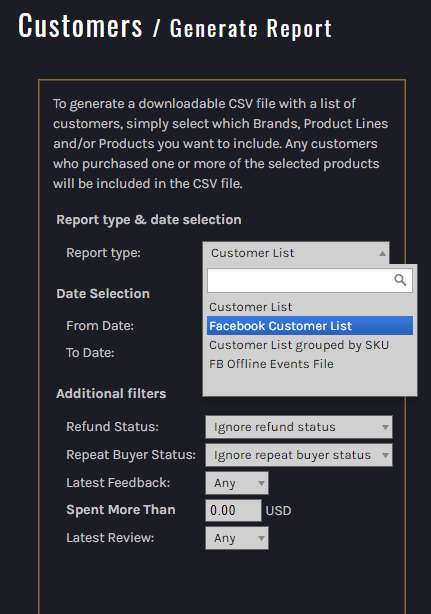 You can generate as many reports as needed, specifying multiple combinations of criteria and choosing from several output formats:Use of the report generator is covered fully in the Knowledge Base.Take a look at the new layout in your ManageByStats. Find it under:Customers > Generate Report

Over 800 million monthly users are active on Instagram. More than 60 million photos are posted each day, and 1.6 billion daily “likes” are given.There’s also a large number of influencers on the site with a massive amount of followers. And with the right plan, you can become an influential brand, too.You need to post the right kind of content to stay relevant to current followers while also bringing in new ones ...10 Powerful Instagram Marketing TipsThese days marketing of all kinds tie in perfectly with chatbots. What's a chatbot? Better yet, how do you make the most of them?Check out this next article for some of the best, most comprehensive insight into the world of chatbots, from what they are to how to use them ...How To Build A Chatbot: The Essential Guide For 2019

Changes ComingUsers of ManageByStats are independent merchants, selling through the Amazon platform we know as Seller Central. On Amazon this is called “the marketplace”.Amazon also buys wholesale, using another platform called Vendor Central. Changes are coming to that system which will mean more sales traffic for those selling in the marketplace.If you’re getting this newsletter, this almost assuredly means you.Amazon secures inventory two ways. 1) The company buys products directly from wholesale vendors, reselling them like a traditional retail store, and 2) it lets independent merchants post their own products on the site in a marketplace similar to EBay Inc. or a consignment shop. (This is you, the independent merchant.)About half of the goods sold on Amazon come from independent merchants, and the coming change will push that marketplace share of revenue even higher.This is big. U.S. shoppers will spend $317 billion on Amazon this year, representing 52.4% of all online sales. Profits have increased for seven consecutive quarters, a trend investors expect to continue through the rest of the year, and these changes are only going to make things sweeter for independent sellers in the Amazon marketplace …Amazon Expanding Online Marketplace More News On 1-Day ShippingWe’ve been covering this strategic move by Amazon, and top analysts are calling it Amazon’s next big push toward complete retail dominance.But it’s a big move. Lots of inertia to overcome, lots of logistics. As a seller, they’re going to need your help.One-day shipping is likely feasible for Amazon, but more than half its sales come from third-party (independent) sellers, making them critical to achieving this new goal. Third-party merchants were responsible for 58% of Amazon's sales in 2018, an enormous jump from 3% in 1999.Because of this, if the e-commerce giant wants to have any chance of making the lion's share of the items on its marketplace available for one-day delivery, it'll need help from those sellers ...Amazon Is Incentivizing Sellers New York Joins The Tax ParadeLots of Amazon news this week. But these are timely items, and our final news note for this issue has already gone into effect.Amazon is now collecting & remitting Sales tax for New York State as a Marketplace Facilitator state.That's 14 states and counting..As always, Sales tax details are included in the MBS tools, and specifically in the Geo Analyze tool.Here’s the page from Amazon (you’ll need to be logged into Seller Central):Amazon MFT FAQ

I was walking down the street when I came across a homeless man who asked me for a couple of dollars for dinner.I took out my wallet, extracted ten dollars and asked, “If I give you this money, will you buy some beer with it instead of dinner?”“No, I had to stop drinking years ago,” the homeless man replied.“Will you use it to go fishing instead of buying food?” I asked.“No, I don't waste time fishing,” the homeless man said. “I need to spend all my time trying to make it.”“Will you spend this on hunting equipment?” I asked.“Are you crazy!” replied the homeless man. “I haven’t gone hunting in 20 years!”“Well,” I said, “I’m not going to give you money. Instead, I’m going to take you home for a shower and a terrific dinner cooked by my wife.”The homeless man was astounded. “Won’t your wife be furious with you for doing that?”I replied, “Don't worry. It’s important for her to see what a man looks like after he’s given up drinking, fishing and hunting.”

“Success is not final; failure is not fatal: It is the courage to continue that counts.”- Winston Churchill To your success,Your ManageByStats TeamRead Our Newsletters Online!Share Your Thoughts About ManageByStatsWe’ve made it easy to leave a review:Tell Us What You Think About MBSThanks for taking a few moments to give us your feedback!And don't forget to share ManageByStats with your friends. Our affiliate program pays you an ongoing 25% referral commission.See the Affiliate menu under Settings in your ManageByStats.